The owners had been thinking for a while that it would be nice to live a bit more sustainably and dreamt about owning an energy efficient house full of green technology. However, they love their Fort William home, which was built around 1880 and weren’t really ready to part with its character and charm so they started thinking about how to improve what they had.

A thermal imaging survey from LEG seemed a good place to start. The survey highlighted some obvious problem areas such as draughts or poor thermal resistance of the single glazing, but also helped identify some less obvious problems- such as quite dramatic cool spots in the side extension.

The owners realised that although they would like to install renewable technologies they first needed to raise the thermal resistance of the existing building. To make this process a bit more interesting they decided that they could tie any improvements in with a touch of redecorating and even the removal of an internal wall.

To focus their thinking they put together their own sustainability action plan; a detailed set of ideas and targets. One area they knew they had to tackle was the single glazing as if a room’s air temperature is 21ºC the temperature of single glazed windows can be around 20ºC different where as double glazing will differ by 8ºC and triple by 4ºC. Therefore any improvement here would make a big difference to the overall efficiency of the house. The problem was that the property was fitted with its traditional sash windows and the owners really didn’t want to compromise them. After a lot of research they discovered an Edinburgh based firm called Slimlite who could supply double glazing with a very narrow cavity between the glass panes. Although not quite as thermally efficient as normal double glazing this glass would mean that the original sash frames could be kept. A study undertaken by English Heritage found that traditional sash windows had a U-value of 5.3 W/M2K, the new glass would reduce this to the building regulation recommended level of 2.0 W/M2K. They were also fantastic value for money at only £2200 for 46 panes and were  fitted in a few days by joiners.

Built in 1880, the building did not have any cavity walls that could be filled, therefore to increase the wall efficiency the owners needed to consider internal or external insulation. The survey found that the external wall in the dining room (which also contained an unused open fire) seemed to have quite a few cold spots. Rather than simply insulate the wall and make the room smaller the owners realised that if the internal wall between it and the living room were knocked down the room would become far more user friendly. This meant that the space could be re-designed as the entertainment area with insulation being added on the internal wall as well to prevent noise filtration through to the neighbours’ house. The fireplace was enclosed behind the new plasterboard and 15mm of Celotex insulation . New skirting boards were fashioned to match the existing ones in the living room. On top of this, extra wall insulation the floorboards were lifted and 6 inch Celotex suspended between the joists as well as sealant applied around the exsiting skirting boards. The carpet underlay was replaced with a Tredaire Dreamwalk one which has high thermal (Tog factor of 3.13) and good sound insulation properties. http://www.interfloor.com/underlays/underlay-selector/

A new wood burning stove replaced a ‘living flame’ type faux-fire to keep the living room cosy within its new wrapping of insulation. 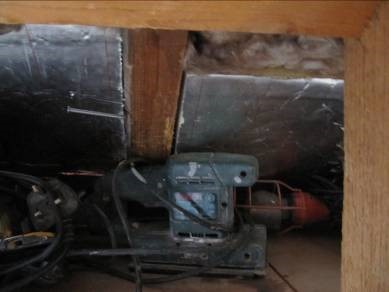 In the attic extra insulation was added at rafter level and a decorative skylight was covered with a piece of clear Perspex and then surrounded with a glass box with a second piece of thicker Perpex to act as a heat trap for the sunshine filtering in through the velux window.

Located at the back of the house in an extension the kitchen originally felt cooler than the rest of the house. The external door wasn’t fitted as tightly as it could be and the windows were again single glazed and draughty. After discussion with an architect a full scale rebuild was considered to be too great a cost so instead the kitchen was given a facelift. The roof was taken back to the rafters which revealed some damp problems and no insulation. New triple glazed windows replaced the existing windows and were added to the newly installed full height ceiling (with added insulation!). A new door was fitted along with ultra efficient LED lights and the whole room given a smile with cheerful paint and a fabulous new environmentally friendly marmoleum floor.

Oddly enough the newest part of the building, a side extension, was the coldest part of the house. The thermal camera found numerous spots for concern and a later building inspection confirmed the findings noting that there was no insulation in the roof and that the quality of the build was not as good as it should have been. New insulation was squeezed in, an unnecessary french door sealed shut and a new triple glazed glass door added. The room had also been designed with a turret attached to take advantage of the views, however this extra height pulled all the warm air up into it which then filtered out through the windows and doors. A simple glass door was added at the bottom so as not to lose the flow of the room but keep the warm air in. From a room that was really too chilly to be used in cold months this has now become a spacious dining room to be enjoyed in all weathers.

The owners approached the project room by room over a three month period. They openly admit that the process meant that the house felt like a building site for months on end and that while the kitchen was being done they were cooking off a camping stove. However, they also describe the process as being good fun as they were able to redecorate and add different elements into the retrofit like taking out the internal wall. They also enjoyed sourcing the right crafts people to mend the stained glass skylight or discovering the all natural floor for the kitchen. Ultimately they have ended up with a more energy efficient house and are looking forward to a lower fuel bills and the results of a repeat thermal imaging survey in winter 2013.

We absolutely love it – we had a lot of fun rising to the energy challenges involved in making an old Victorian house sustainable for the future (although, as anyone who has done home reconstruction while still living in the house, not entirely stress-free…!). Anyway, we are living proof that this can be done – and we also have hard evidence to prove it, as we have also invested in a ‘Nest’ learning thermostat system https://nest.com/ie/thermostat/life-with-nest-thermostat/ to monitor our home energy use over time, which has fallen substantially as a result of all our improvements.

If you would further information on this project, please contact the LEG office: 01397 700090