Attached to a panel are double walled glass tubes with a vacuum between the walls. This vacuum allows the heat 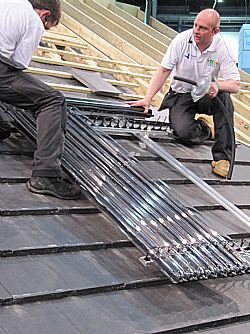 from the suns radiation to enter the tube but not escape (much like a thermos). This heat warms the liquid inside a copper tube which runs along the inside of the tube. As the liquid warms it turns to gas and rises to the top of the tube. Here, the heat is transferred via a bulb (see picture on left) to water that runs via the panel. This water then travels via pipes to a hot water cylinder, heating the water inside the tank via convection before travelling back to the solar collector panel.

What was it replacing?

How long did it take to plan/install:

As the household were planning on extending their property it made sense to look into the various renewable technologies at the same time. They were aware of other houses on Eigg who had installed solar thermal systems and felt that technology would suit their needs and complement their existing biomass back boiler. Installation of the panel on the roof took around half a day and then another day at most to install and plumb in the new water cylinder.

The manufacturers claim that there are no onward maintenance costs to the panel itself but the system does require electricity to pump the water from the roof to the cylinder and back. The owners have had some problems when the island receives power cuts as the pump will not work. They are considering the possibility of an additional solar PV system to generate the required electricity.

The system needs to heat enough water to service the household, the holiday lets and the campers. So far the owners have been really pleased with how it has been performing. Usually in summer the owners would have been turning on the 3kW immersion heater for approximately one hour a day (electricity on Eigg costs 21p per kWh) to get hot water but now the solar thermal is providing all the water necessary. During the winter months there was a noticeable improvement in the temperature of the house as the back boiler only needed to top-up the hot water and could therefore concentrate on circulating hot water around the radiators (this also meant that the demand for wood was much lower). The temperature in the hot water cylinder is monitored and the owners have a control panel which tells them the temperature in the bottom, middle and top of the tank. This way they know if they need to top-up the water using the back boiler or immersion (the bottom of the tank is heated by the solar thermal, the middle by the back boiler and the top by an emergency immersion).

To save money when the system was installed the owner opted for plastic piping, this however could not take the necessary high temperatures and caused one pipe to burst. These pipes were promptly replaced with copper ones and there has been no issue since.

If you would like to speak with the owner about his project, please email or telephone Sue and Neil Hollands – [email protected] or 01687 482 480